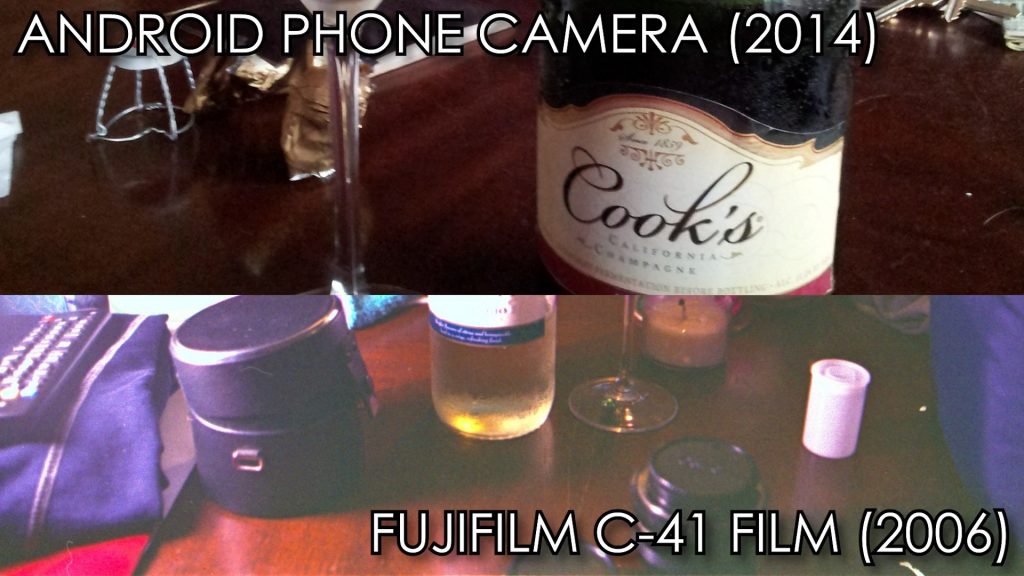 Vox published a video a few years ago about how “color film was made for white people.” There were two major claims that dictated the entire framework of the video:

Anyone who understands a decent amount about photography and especially about beloved ancient color films such as Kodachrome 25 can easily debunk point 1, because it’s a simple and visually very obvious matter of poor dynamic range and decisions about exposure. Old film has 6-7 stops (a “stop” is an exponential change, where a stop of difference is a doubling or halving of light) of dynamic range, but new film and most digital cameras have double that dynamic range. When you expose for correct midtones on old film stocks, you would inevitably lose all your darker and lighter areas, meaning an outdoor photo would have little to no texture on clouds and very bright surfaces and anything about 3 stops lower than the value exposed for would be very dark and featureless. New film has no such problem, and digital cameras and camcorders don’t sense images the same way as film.

But what of point 2? The color film formulation claim is not so easily dismissed with simple physics and easily researched facts about film stocks. I’m not personally willing to do the level of digging required to find out what film chemistry was like in the 1940s, assuming that such documentation still exists and is somehow still accessible. However, I was poking through my scanned color film negatives one day, and I was surprised to discover that I had taken a photograph that might illustrate that Vox’s “no brown tones in the chemistry” claim was a lie. It was a dark brown wooden coffee table with some very slight reddish tones in the finish. Shuffling through other pictures I had, I found a cell phone picture from a year or two prior that contained the same table, taken with different lighting but the differences were way too visually obvious to resist. In my film photo, it looks almost like a cinnamon finish even in the shadows and even though the rest of the photo has good white balance. In my cell phone photo, the darkness of the finish is obvious, and the two brown tones look almost like different tables entirely.

The film photo was taken on good old standard-issue FujiFilm ISO 400 from Wal-Mart that expired roughly around 2006 and uses the C-41 color film process for development. The phone photo was taken on a relatively cheap ($150 or so?) Android cell phone bought around 2014-2015.

How is this still a problem, Vox?

The problem with Vox’s claims start to become immediately apparent. Sure, Kodak is an American company that makes film with the (majority white) American market in mind, so it’s at least plausible that Kodak might not have added the necessary chemistry for various reasons (cost, complexity, or perhaps even the Vox video’s implications of racism), but FujiFilm has always been a Japanese company that would operate primarily with the Japanese market in mind. Japanese people have a wide variety of skin tones with plenty of variations of olive, pink, and yes, the notoriously “left out of the chemistry” brown. The film stock I used is also from the 2000s, well after the racist film problem was supposedly solved to appease wood furniture sellers and chocolate makers. Here’s the relevant screenshot from the video, in case you haven’t watched yet:

In case it’s not clear, the Android phone photo’s color is pretty close to the actual color of the table, but the film photo is way off, even if you only look at the shadows and ignore where the sunlight is hitting it.

So, if Vox Media’s video about racist color film is correct about their film chemistry claims, why would a Japanese company with a target market full of colorful brown people put out a film stock many years beyond the “fixed brown tones” mark that doesn’t reproduce brown tones accurately? Are we to believe that Fuji is racist against their own people? No, that’s ridiculous, just like Vox’s claims of racist film chemistry are ridiculous. Fortunately, I have come up with a much simpler explanation that makes a lot more sense. 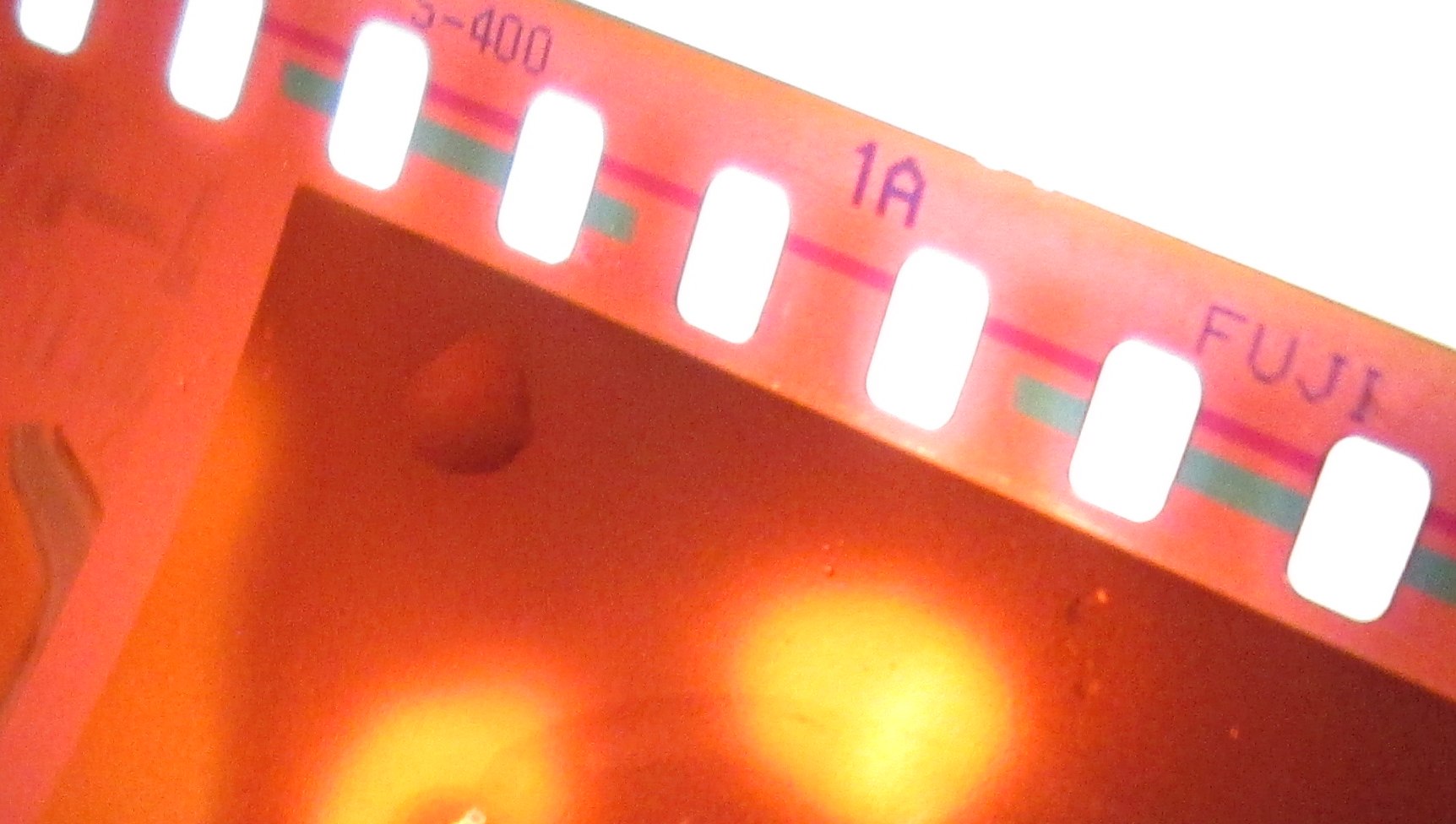 The picture above is not just any film negative; it’s the first C-41 color film negative I ever developed on my own, and it’s one of about six rolls of Fuji ISO 400 that I got with my Canon T50 film SLR when I bought it and picked it up in a literal hurricane a few years ago. What color is the negative material outside of any photos? If you said “brown” then congratulations, you have fully functional eyesight. A negative must be converted to a positive before it can be used as a normal photo, so the colors must be inverted. Here’s how that would look when done on a computer: 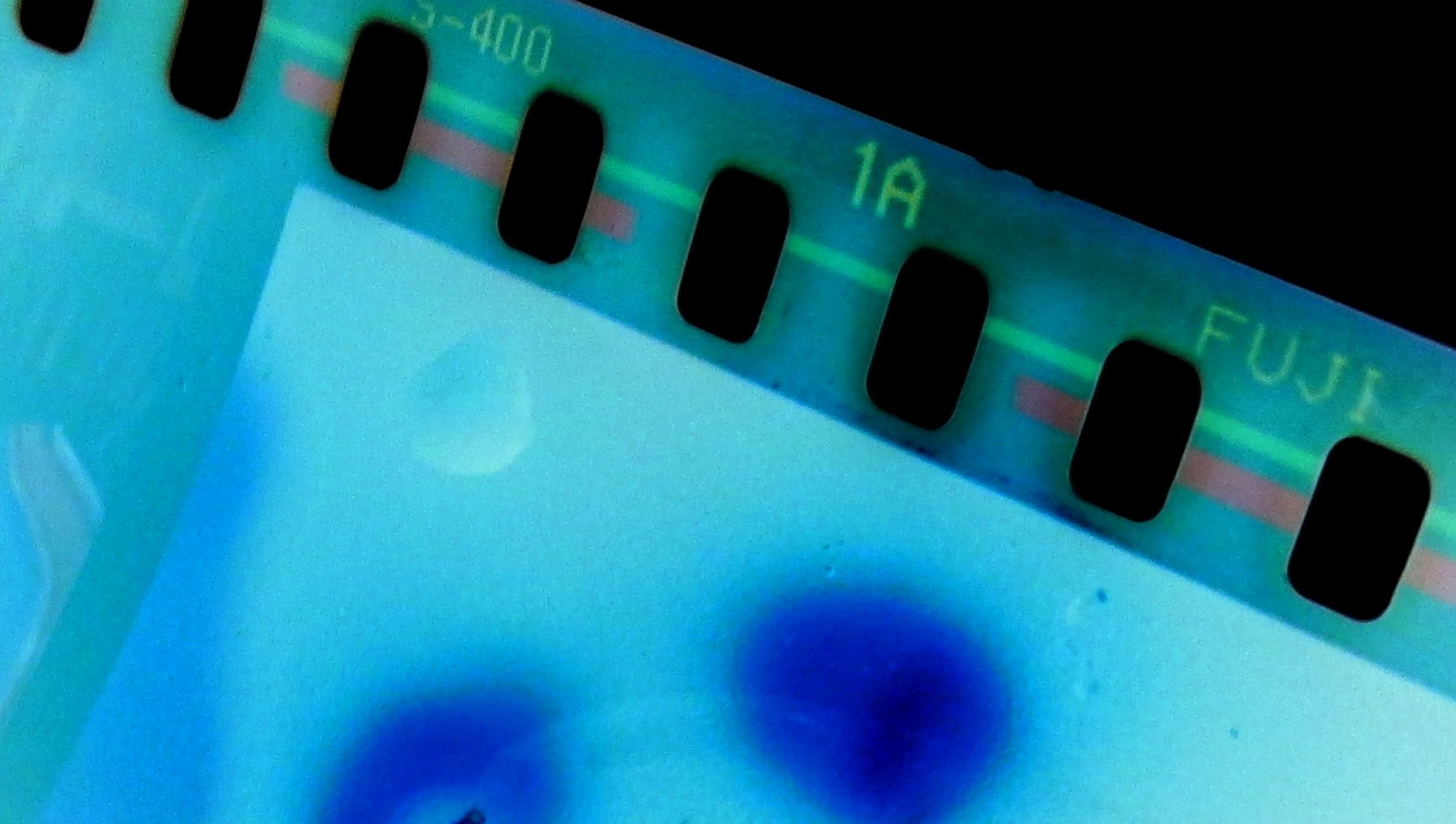 Ouch. Instead of the brown stuff, we now see the lovely color cyan. Cyan is the inverse of orange, so brown (dark orange) will invert to dark cyan. To fix this, we’ll have to remove a lot of cyan from the image… 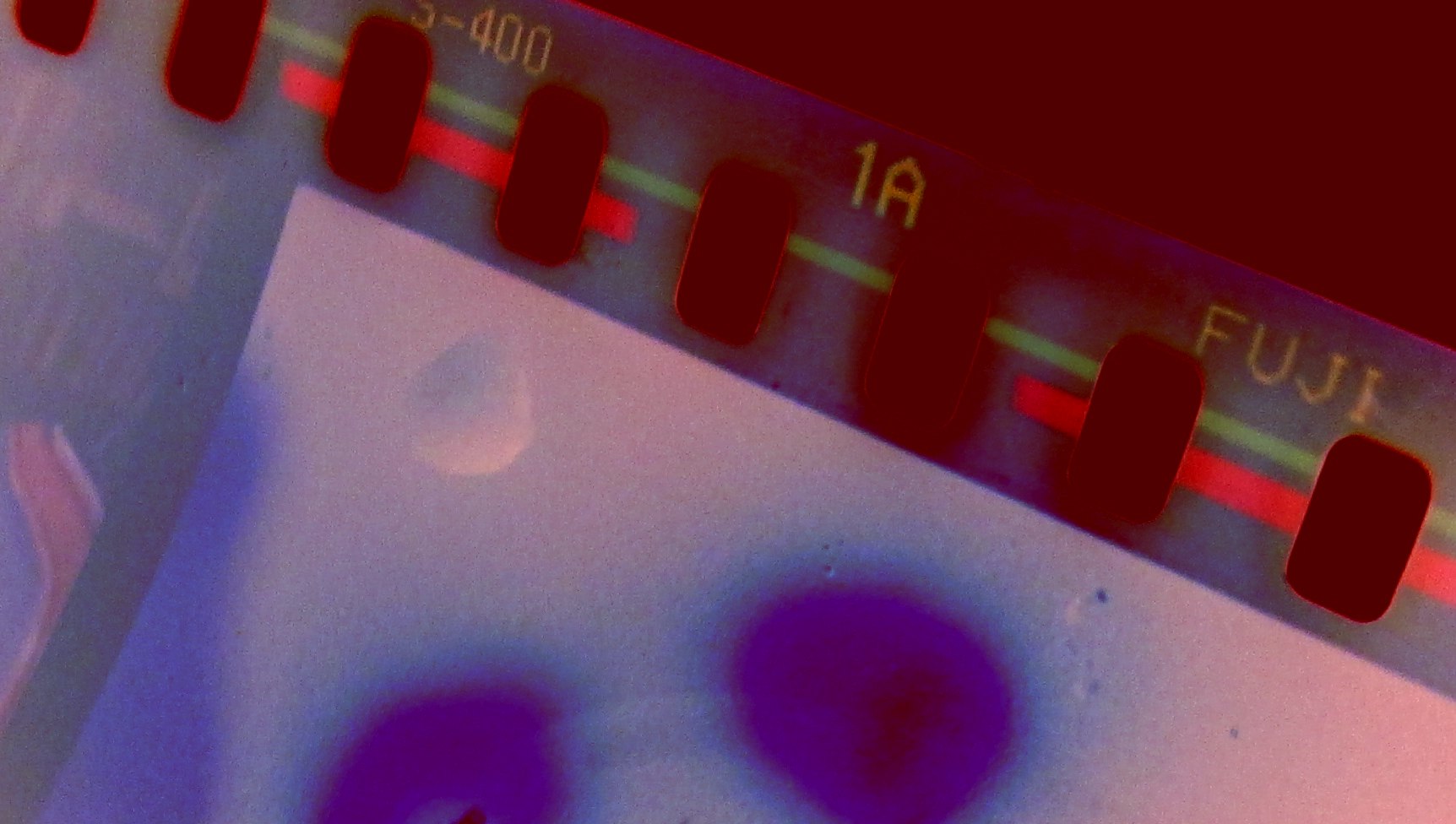 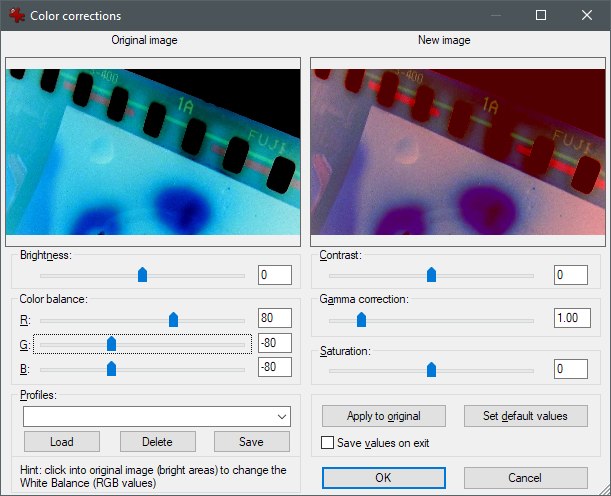 The positive image being heavily skewed towards the inverse color of brown means that reproducing brown with color negative film is only possible with a reduced level of accuracy. Brown in particular will be reproduced less accurately than its brighter relative (orange) because brown already has a weaker effect on the film due to being a darker color, plus it’s fighting a heavy color shift towards its inverse. This also affects the reproduction of cyan (obviously), but unless you’re spending your whole day photographing the lichen Xanthoparmelia with color film for some reason, you won’t see enough cyan in nature (or even outside of nature) to notice the reduced color quality. Anytime you shift the tint of an image, you necessarily artificially reduce or increase the amount of a color that can be accurately reproduced. While film is an analog medium, it has its limits just like any digital image, and the more you “push” or “pull” that image, the more observable those limitations become.

Imperfect proof, but quite sufficient

This doesn’t offer definitive proof that Vox’s claims of racist color film chemistry are false, but it heavily strains credulity that the cause of poor reproduction of “certain brown and red tones” was racist film chemistry formulations when all of that was supposed to be a problem before the 1990s (at the latest!) and an film stock made for a market full of brown people from the 2000s and sold in stores all across the globe still exhibits the same exact issues. The brown backing of C-41 color film and the tricks required to neutralize the effect of that brown tint only further erode support for the notion that it’s a problem of “oops, we left out the brown people ingredients” film chemistry.

If I have to choose between “racist conspiracy of white America that somehow still applies to film made for countries full of brown people” and “the brown backing makes it harder to reproduce brown because you have to remove the brown to make it look normal,” I am definitely going to pick the latter. It’s a simple explanation that can be easily observed and tested in an imaging program rather than an elaborate conspiracy theory presented by notorious social justice race-baiters and that doesn’t fit easily observed facts.

(I’m also never going to let them live down that trick in the original video where they used Kodachrome with very bad dynamic range as the “black people looked bad” example and much newer Kodachrome with good dynamic range as the “white people looked good” example. You dirty lying bastards knew exactly what you were doing when you chose those two photos.)