Get woke, go broke? Some have argued that Gillette’s parent company benefited from the Gillette ad, citing the spike in stock value that took place over a week after the ad ran. Others argue that the ad harmed Gillette’s stock and was a net negative.

Here, we see the truth. Gillette’s parent company, P&G, was growing at a rate of $0.12 in value per day from May 31, 2018 to December 14, 2018. There was a big drop at Christmas (not unusual for a retail company’s value to drop after the busy holiday buying season ends) and there was a correction one month later. The Gillette ad ran near the end of the low period spanning the first three weeks in January.

Zoomed out, it may appear that the ad caused the spike in stock value, but zooming in shows that the entire week after the ad was put out represented a loss in value, NOT a gain. The facts speak for themselves: if the ad had any short-term effect at all, it was a negative effect.

The subsequent spike is also easily explained. Because the ad was controversial and the stock spent a week dropping, bullish investors could see that a correction was overdue from the December drop and took the opportunity to buy while the price was going down so they could ride the stock on its way back up. This kicked off the expected correction.

What is most interesting about the charts (and ignored by those who endorse fact-free “woke” political agendas) is the long-term growth rate. Before the drop and correction, they were gaining value at $0.12 per day, but after the Gillette ad ran (and the expected correction from the December drop was finished), this dropped to $0.10 per day, a loss of 1/6 (16.67%) of the entire company’s growth. P&G is a huge company and Gillette is only one of their many brands; 19 of their brands rake in over $1 billion annually, and Gillette is one of those brands.

This was written up because of a comment by “Old Blanco Rd Productions” on a Coffee Break video about “woke advertising” on YouTube. Notably, this commenter would repeatedly try to pull the conversation back to an advertisement by Nike featuring Colin Kaepernick, an ad which caused some controversy because Colin is the originator of the “take a knee during the national anthem” thing at football games. The same commenter didn’t want to talk about Gillette and P&G and was only interested in Nike and pushing the statement that “Nike added $6 billion in value after the Colin Kaepernick commercial!” Typical bullshit accusations of “sealioning” by a “Spencer Person” ensued, though sealioning is nothing more than a logically fallacious attempt to discredit people who demand that you support your arguments with facts. Quoting from that last link: “In other words, “sealioning” is a gag to be imposed upon people you disagree with if they argue with you for too long, too persistently, or in any fashion that you dislike.” To sum it up, these two people are keen to control the conversation so they don’t lose the argument. If you’ve read everything above, you can see why they’d rather accuse me of illegitimate tactics than to accept the cold, hard, high-low-close facts in the stock charts.

What that last paragraph leads up to is this: I watched both commercials. The Nike ad was only controversial because Colin was in it, but the ad itself is not actually a “woke” ad. It’s a typical Nike ad with a positive message that encourages you to get out there and be successful and stand up for yourself. It’s a well-done advertisement that does exactly what a major brand wants: to connect their brand with positive associations in the mind of the viewer. The Gillette ad, on the other hand, was a negative ad that stereotyped not only the entire male gender, but also visibly drew racial divides, with white males as mindless villainous rapists-in-waiting and black males as the only thing keeping them from raping everybody out here. Its “positive message” was nothing more than sprinkles on a racist, sexist, man-hating, race-baiting turd of a commercial that reinforces the premise that men are pieces of trash by default. The Nike ad worked out well for Nike because it was a good ad with a good message. The Gillette ad disproportionately hampered the growth of a company that has 18 other billion-dollar brands they derive value from because it was designed to press all of the controversial sociopolitical agenda buttons that it could.

Back in 2014 when Jesus rode dinosaurs and Nazca aviators ruled the skies, I wrote an article about the AMD FX-9590 and how it beat all of the modern Intel chips of the day in a price-to-performance comparison I performed. It was a better value than every Intel Haswell and Broadwell chip available in 2014. Of course, benchmarks of newer systems against the aging FX-9590 show that gaming performance is clearly way better on newer platforms, largely due to PCI Express 3.0 support (FX-9590 boards max out at PCI Express 2.0 x16) and, more recently, the rise of consumer DDR4 memory and NVMe solid-state drives. As I was poking around various system benchmarks for newer platforms, I got curious about the FX-9590’s price-to-performance ratio today, four years and several processor generations later. You’d expect a chip that’s several generations long in the tooth to fall behind in value due to improvements in newer platforms, especially with AMD’s new Ryzen architecture fighting Intel’s 8th-generation i7 offerings.

Imagine my pleasant surprise when I saw this:

Modern CPUs in the picture are boxed in orange. Notably, the price of an FX-9590 is way down from the $250-$300 range where it hovered for a long time. Amazon prices really are close to the stated $99.99 price tag. Four years after the power-sucking 220W 8-core beast was released, it continues to dominate in provided performance per dollar. I’m still using the FX-9590 system I built four years ago for heavy-duty computing work and video editing. I have other computers that are actually from the current year, but none of them is as fast as the FX-9590 box.

Long live the AMD FX-9590. You’re my favorite space heater and I hope you keep humming under my desk and making me uncomfortably hot for a long time to come. 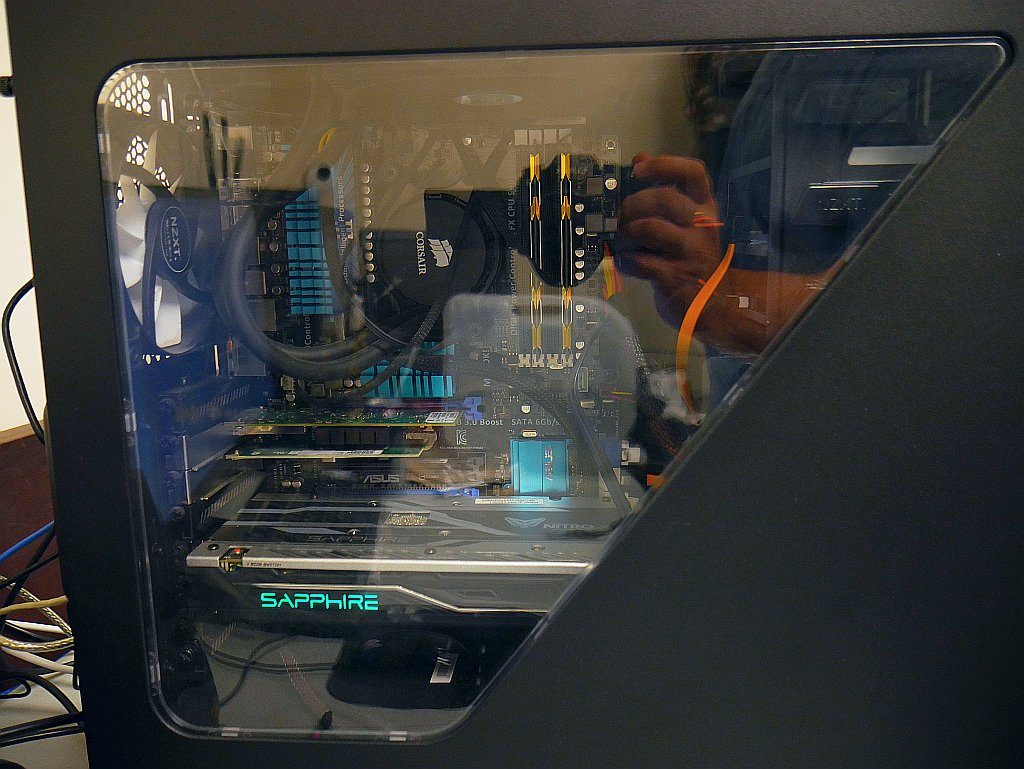 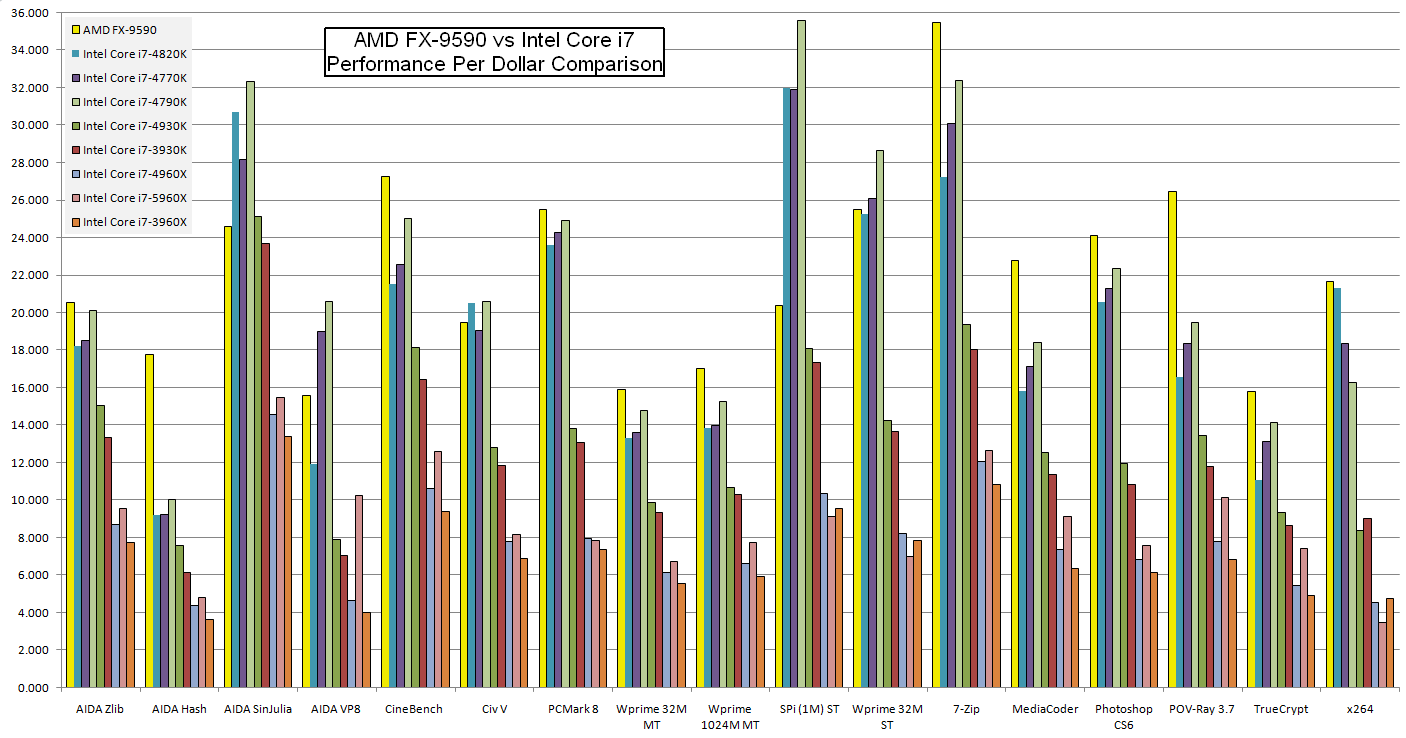