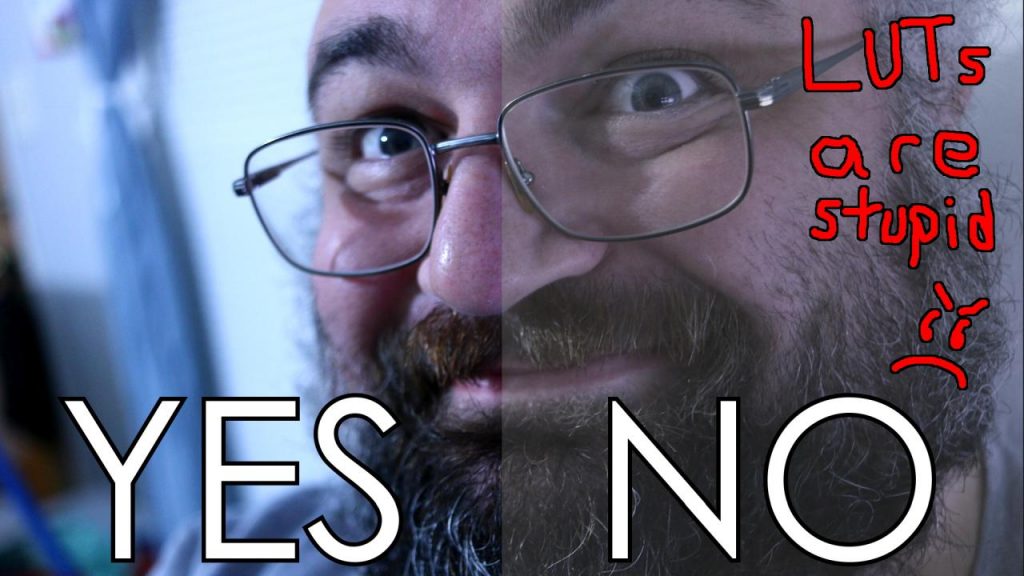 Shooting log, shooting flat, using LUTs, turning down the contrast…stop doing these things! Unless you have a 10-bit capable camera, shooting with log profiles like Cine-D, V-Log, C-Log, S-log, or Technicolor CineStyle will only damage your footage and limit what you can do with it in post-production. I usually explain this in mathematical terms, but that can be hard to grasp, so this video serves as a short overview of the things that you should avoid in the realm of picture profiles and saturation/contrast settings.

For a lot more information about this subject, this article will satisfy most of your curiosities: YouTube video experts don’t understand why flat/log footage on 8-bit cameras is a bad idea

UPDATE: There’s a new video I put out that covers a lot of the same ground, but gets more technical and has more examples and information. Feel free to watch both.

[UPDATE 2: The launcher “Zeam” seems to be even lighter than LauncherPro.  Changing VM heap size to 12 and enabling JIT seems to improve the phone’s AVERAGE behavior considerably. While slower than after the initial boot with VM heap size = 24 + no JIT, the latter combination seems to slowly degrade performance until a reboot is needed, while the new settings don’t have such an effect. However, my phone is literally FULL with apps, so if you run lighter (i.e. remove Maps and Google Voice, don’t have many apps) you may prefer the 24MB heap size.]

[UPDATE 3: You REALLY should perform the EzTerry 14MB RAM hack which makes a massive difference, but requires more advanced work and is beyond the scope of this tutorial.]

I managed to FINALLY get my T-Mobile G1 to perform very well while running Cyanogenmod 6 (specifically I’m running CM 6.1-RC1 for Dream/Sapphire), and because it’s been such a difficult and elusive process, and people all over the Cyanogen forums have been screaming about often lackluster T-Mobile G1 performance (due to the 96MB of OS-usable RAM installed in the G1) I should share everything I’ve done to get this far.

What’s so different about my performance as compared to others who report GOOD performance with a CM6 G1 is that mine had started to become quite poor, which is often the case with these phones and custom ROMs.  Everything would work great after a wipe+flash, which erases pretty much everything, and then over the course of a few weeks the performance would drop until it became laggy and very annoying.  Reports of dialer/phone appearance on an incoming call lagging so severely that calls would be missed are not uncommon.

How does it perform?  Well, most of the time the launcher doesn’t unload, meaning my icons appear immediately when I go “home.”  When it does unload, it’s very quick to come up.  Application load times are drastically better and there is no noticeable lag in most usage cases.  In particular, the 3D gallery, which is very notorious for being slow to come up when using the default CM6 settings, pops up in approximately 5-6 seconds, and all of my 150 or so pictures on my 4GB Class 4 microSD card pop up in another 4-5 seconds (the first gallery startup makes thumbnails and is significantly slower, but we can ignore that since it’s largely a one-shot deal.)

BIG FAT UGLY NOTE TO ALL G1 CYANOGENMOD USERS: The default CM6 Dream/Sapphire settings are NOT OPTIMAL FOR THE T-MOBILE G1!!! I will be telling you to change settings in the “Performance settings” which has a BIG WARNING when you open it about dragons and voided warranties. Don’t worry, you’ll be safe with my setting changes.

First and foremost, you need to get some apps from the Market.  Search for and install the following:

Now we’re ready to clean up the software on the G1 and get it performing like it was meant to.  Follow these steps:

[UPDATE: Don’t remove ADWLauncher; if something goes wrong and you remove Zeam or LauncherPro, you’ll have NO LAUNCHER and a reflash will be forced upon you. The 14MB hack will relieve some of the memory pressure and make this unnecessary anyway.]

Type “exit” three times to leave the console.  After all of this mess is completed, I’d suggest rebooting the phone to make sure everything is in a consistent state.  I noticed that lots of services run at initial startup, so don’t be alarmed if the G1 is slow for about a minute after the launcher appears.  I have found that deleting my Messaging threads and limiting them to 100 messages per contact significantly boosts Messaging app performance. Since Messaging is locked in memory, you might want to regularly clean it out to maintain optimal performance.  The same goes for the various Browser caches and saved information, though cleaning these will only make Browser perform better and has no effect on the entire phone.

After doing all of this, I noticed that my phone boots faster and is extremely responsive all of the time.  Even when the system reloads LauncherPro or starts an app from scratch, it’s MUCH faster to do so.  AGAIN, note that I am NOT using ANY of the following performance hacks:

Please leave a comment with feedback if you followed these directions.  I can’t provide help (that’s what the CM forums are for), I just want to know how it works for others.  Thanks!