This was written April 1, 2012 and is not an April Fool’s joke. If you’re reading this years later for some reason, check to see if my reasoning still applies.

I walked into a CompUSA store to purchase myself a new machine with lots of cores for faster compilation of the Tritech Service System, among other things I do daily that require Linux and for which I didn’t have a decent home machine to work with. Ever since I got Netflix, my Toshiba Satellite P775-S7215 (arguably the best laptop I’ve ever used in my life, and certainly more than I ever paid for a laptop before) has been stuck in Windows 7 so that I can watch things while I work. It’s also nice to have the Windows GUI running for Internet use and document reading while plunking around in Linux on the compiling machine, which I have given the name “Beast” because…well, it’s a beast…but I digress. I walked into a CompUSA store, started tossing items into the shopping cart, and got to the CPUs, for which someone must help me since they’re behind a counter.

I asked what they had, and then said I was debating AMD vs. Intel. The employee behind the counter made the blanket statement, “Intel is always going to beat AMD.” I knew better, so I headed over to my favorite place to compare raw CPU performance, and started asking him for CPU prices and names. When PRICE was taken into account, AMD always beat Intel, rather than what he had told me, and he seemed as if he had lost a piece of his religion when I told him about it. There’s a serious problem in the computer hobbyist world where blanket statements are made and repeated ad infinitum regarding a variety of things, and this AMD vs. Intel performance debate is the worst of them all.

Before I explain why I say Intel loses to AMD on every price-to-performance ratio comparison, I’d like to mention another hardware experience that came before this which illustrates that skepticism and Google-Fu are extremely powerful tools. The WD20EARS 2TB 5900RPM SATA hard drives no longer have the excessive head unloading issue, which was a severe problem and very common cause of failure before even a single year of use was had in those particular Western Digital drives (and I believe some other early WD Green drives as well). I know this because I looked it up while staring at two of these drives I wanted, and reading that the issue was no longer present in the newer series of WD20EARS drives, and then purchasing them and using smarton montools in Linux to CHECK THE HEAD UNLOAD COUNT during a variety of usage scenarios. The count didn’t exceed 100 unloads within a week, and that put the issue to rest for me. (The approximate unload count needed for a drive to start failing is 300,000 and 100 in a week would take 3,000 weeks to reach that unload count.) I got two 2TB hard drives for $80 before the Thailand flooding happened, and I don’t have to worry about a manufacturer-caused premature failure occurring in them.

On to the meat of this discussion. My methodology is extremely simple. Go to a website such as Newegg, pull up CPUs that are the same price (or very nearly so), and compare the CPUs at cpubenchmark.net. If you’d like to give them some sort of price-to-performance score so you can perform comparisons across prices, you can divide the CPU benchmark score by the price, then multiply by 100 (since you’ll get LOTS of decimal places). Let’s see how this works out in real-world terms. As of April 1, 2012, the price of an AMD Phenom II X6 1045T processor at Newegg is $149.99, while the best Core i3 available at Newegg (the Core i3-2130 dual-core) is also $149.99. There are two other Core i3 CPUs at that price, but they are slower or are a first-generation i3, and anyone who is a savvy buyer will get the best bang for the buck, so those are being ignored. Why not an i5 or i7? Well, it’s not an apples-to-apples comparison when you put a Phenom II X6 against an i5 or i7, not because of some notion of “CPU generation,” but because you can’t even get a Core i5 desktop CPU at Newegg for less than $179.99, so there’s simply no i5 or better in the Phenom II X6 price range; also keep in mind that I’m justifying a personal purchase which fits personal budgetary concerns (mine was a 1035T for $130), and I put the price difference toward getting 16GB of RAM instead. If you have a higher budget, you’d need to compare against a better AMD CPU, which we’ll do in a minute. So if we perform the price-to-performance score calculation that I came up with earlier, what do we come up with for these CPUs? We’ll also compare the cheapest available i5, which on a price-to-performance scale is also beaten by the selected Phenom II X6.

So in terms of price-to-performance (which most of us refer to as “bang for the buck”) the AMD Phenom II X6 stomps both the i3 and i5 chips closest to its price. (Interestingly enough, we also see that the i5 is a much better value than the i3, both of which are the newer Sandy Bridge chips.) Let’s look at the new AMD FX chips that some of my friends have been raving about (and building gaming machines with) to see how they compare against the best possible Intel offering for the same price…

The AMD FX chip pummels the Core i5 at the same price point, and even my Phenom II X6 fails to be “worth it” compared to the FX-8120. If I was not on a budget, I would have gone for the FX-8120 instead. Note how even though the i5-2400 is the best Intel chip in this comparison so far, it still scores 133 points lower than the Phenom II X6. Higher numbers mean more value for the price. Let’s do a few more comparisons against CPUs that I might be interested in if I was building a high-performance box with a higher budget, such as the awesome i7-2600K, just to see where the numbers fall.

I’ve gathered all of these numbers into a chart to summarize the point of this article. I think the chart speaks for itself. I also invite you to do your own math and draw your own conclusions. Feel free to leave a comment as well! 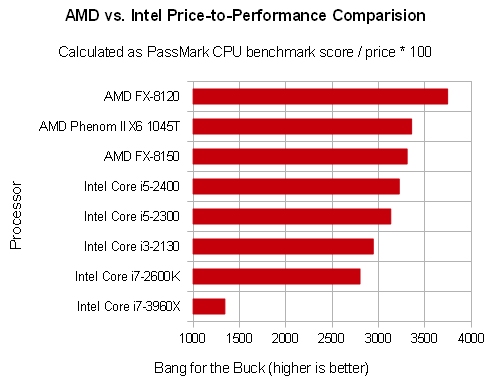 15 thoughts on “AMD beats Intel on price versus performance every single time.”